On a recent trip to Baltimore, we saw a sign for the annual Greek Festival

at the Cathedral of the Annunciation in Greek Town………….

Little did we know what adventures lied in store for us….

But first, in usual Tin Man fashion, I must give you a bit of history about the Cathedral of the Annunciation…..

It is the oldest of all the 18 Greek Orthodox parishes in Maryland.

The Cathedral is an important center of History of the Greeks  and the survival of Greek culture in Baltimore, and hosts an annual Greek Food Festival.

The Greek Orthodox Cathedral of the Annunciation building was constructed in 1888 (the building originally housed a Protestant congregation), however the current congregation was established in 1906 and only moved to the building in 1937.

In 1975, the Neo-Byzantine style Cathedral was designated as the state of Maryland’s first Greek Orthodox Cathedral.

In 1992 the Cathedral received a historic designation from the Maryland Commission on Historic and Architectural Preservation.

If you have never been to a Greek Festival, please know that you will be able to find the location from about one mile away, due to the enormous racket that ensures!

This was our first Greek Festival and we were almost afraid to venture up the steps of the Cathedral to enter……………………………but enter we did.

Immediately people were shouting at us to go into the basement………okay, perhaps we were part of some ancient legend and they have awaited our arrival to complete the sacrifice….

Off we went to the basement, being slapped on the back and given clamorous and insistent encouragement….

Thelma insisted that we sit with them (NO,……..I really mean it, she had a fierce hold of me and I do believe any attempt to break it would have resulted in bodily harm………mine!)

They were quite charming and so very gracious!  The Tin Man got misty eyed as he enjoyed the pride in their voices as they told stories of Greek Festivals past and their childhood in Greek Town.

The food was marvelous and the company so very divine!

It is a shame that these small festivals, celebrating our heritage are dying around the country.

We had the most amazing traditional Greek wine (who knew!) Restina,

made with the resin of Pine Trees added to it…….wonderful!

If you are ever traveling and see one of these festivals in progress, I encourage you to stop and enjoy a bit of fun……..perhaps you will be lucky enough to meet some interesting people, like Thelma and Louise… 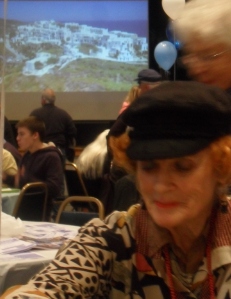 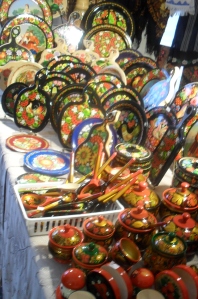 “Not what we have But what we enjoy, constitutes our abundance.”