The crossed keys symbolise the keys of  Simon Peter.   The keys are gold and silver to represent the power of loosing and binding.   The triple crown represents the pope’s three functions as “supreme pastor”, “supreme teacher” and “supreme priest”.   The gold cross on a crown surmounting the tiara symbolizes the sovereignty of Jesus.

The Pope holds the office and jurisdiction of the Bishop of Rome, who presides over the central government of the Roman Catholic Church.

The term Pope was orginally applied to all the bishops in the West and also used to describe the patriarch of Alexandria, who still retains the title.

Peter was allegedly the first Pope, at least according to Catholic tradition, as well as the one who brought Christianity to Rome

All the evidence indicates; however, that Christianity came to Rome well before he would have and even once there he did not serve as bishop or any sort of leader 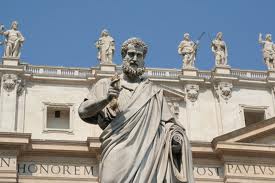 First Pope to resign his office.  Yes there have been seven Popes to resign the office

Pope Gregory XII was the last Pope to resign in 1417 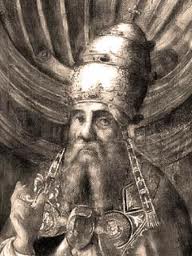 The first Pope whose father was also a Pope, Anastasius I

Anastasius was married prior to entering the priesthood, had Anastasius’ marriage not been valid, Innocent would have been an illegitimate child and therefore been ineligible for the priesthood

First Pope to use the title “Vicar of Christ”

First Pope not to become a Saint

First Pope to adopt a new name when elected.

His given name was Mercurius, a pagan god

First Pope who was subdeacon at the time of his election

Second Pope whose father was also a Pope (Hormisdas)

First and Only Pope from Dalmatia 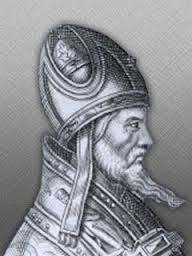 First Pope who succeeded his own brother, Stephen III

First and only female Pope

“John Anglicus, born at Mainz, was Pope for two years, seven months and four days, and died in Rome, after which there was a vacancy in the Papacy of one month.   It is claimed that this John was a woman, who as a girl had been led to Athens dressed in the clothes of a man by a certain lover of hers.   There she became proficient in a diversity of branches of knowledge, until she had no equal, and, afterward in Rome, she taught the liberal arts and had great masters among her students and audience.   A high opinion of her life and learning arose in the city; and she was chosen for Pope. While Pope, however, she became pregnant by her companion.   Through ignorance of the exact time when the birth was expected, she was delivered of a child while in procession from St. Peter’s Basilica to the Lateran, in a lane once named Via Sacra (the sacred way) but now known as the “shunned street” between the Colisseum and Basilica di San Clemente.   After her death, it is said she was buried in that same place.   The Lord Pope always turns aside from the street, and it is believed by many that this is done because of abhorrence of the event.   Nor is she placed on the list of the Holy Pontiffs, both because of her female sex and on account of the foulness of the matter.” 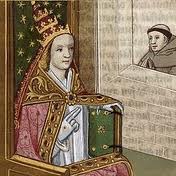 First Pope to be assassinated : First he was poisoned and then beaten to death, by a relative who wanted his possessions

Had the body of his predecessor, Pope Formosus, dug up and placed on trial

The body was thrown in the Tiber River 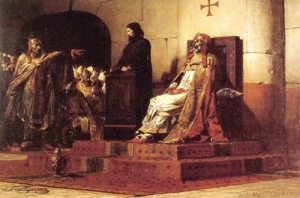 Sergius ordered the death of his predecessor, Pope Leo and the antipope Christopher

First and only teenager elected Pope

First Pope to canonize a saint – Ulrich of Augsburd  in 993 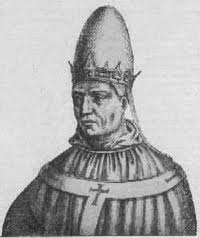 Most Confusing Pontificate in History

He served as Pope three times

Hope you enjoyed this quick looks at Papal Firsts

Should you be interested in more Papal History, here are some interesting resources: