Of course I had to attend the birthday celebration of the Eternal City, Rome, on April 21st!

When you reach my age, you appreciate those who are in your league.

………….but let us go back to the beginning of this grand matriarch of Europe…I will begin with Aeneas, son of the goddess Venus and the mortal Anchises, who left the burning city of Troy, at the end of the Trojan War, with his son Ascainius.  After many adventures, they arrive at the city of Laurentum on the west coast of Italy, whereby Aeneas marries Lavinia, the daughter of Latinus, the king of the area, and founds the town of Lavinium in honor of his wife.  It is then that Ascanius, son of Aneneas, decides to build a new city which he names Alba Longa.  The mother of twins named Romulus and Remus was a Vestal Virgin named Rhea Silvia.  She was the daughter of Numitor and the niece of King Amulius of Alba Longa.  Numitor was the rightful king and the usurper was his bother Amulius.  Amulius feared a future challenge from Numitor’s descendants and to prevent this challenge, forced the daughter of his brother Numitor to become a Vestal Virgin….and you thought your life was complicated!!!  The penalty for violating the vow of chastity was a cruel death (notice there were no rules of this sort for the guys) ……..anyway…….Rhea Silvia was impregnated by Mars but she survived long enough to give birth to her twins – Romulus and Remus and thus the story of Rome begins…………………   (I know you are saying …………finally!!!)

As a sidebar, Rhea was buried alive in punishment for breaking her vows of chastity.

Of course King Amulius ordered the twins to be put in a basket and left to die in the Tiber River.  As luck would have it, the basket washes ashore and is found by a kind she wolf (lupa) who suckles the twins and a woodpecker name Picus who feeds them until the shepherd Faustulus finds the twins and brings them to his home…….lucky boys!!!  ……by the way the Lupercale (a cave) was uncovered on the Palatine Hill in Rome and some think it is the Lupercale in which Romulus and Remus were suckled.

When they grow up, Romulus and Remus restore the throne of Alba Longa to its rightful ruler, their maternal grandfather and set out to found their own city………here it comes folks…but not so fast…….sibling rivalry leads Romulus to slay his bother Remus and therefore he becomes the first king and founder of the city of ROME on one sunny day in April 2,763 years ago…….and for those of you who are interested…..Romulus’ end came when a thunder-storm wrapped itself around him and he was never seen again…..but, by then we had Rome.

whew!………well some 2,763 years later I step into the scene and become fully entranced by all the beauty and history that is modern-day Rome with all her glorious history nestled in the very heart..

Of couse one of the most famous of sites is the Colosseum, her grandeur standing proudly in the center of the old city………..ahhhh but if you listen carefully enough you can still hear the jeers and screams echoing off her walls. 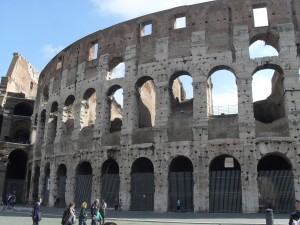 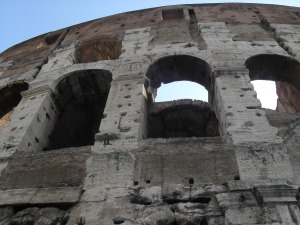 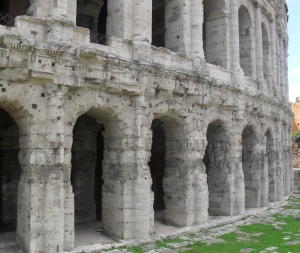 Today the gladiators, lions and poor victims have been replaced by hundreds of feral cats. 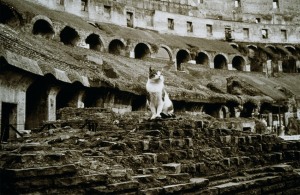 So entrenched in the daily lives of current day Romans are these felines that local politicians who come off best in a difficult situation are referred to as the best cat in the Colosseum.

It is really quite amazing to walk about a modern city and gaze upon ruins of this majestic, ancient civilization 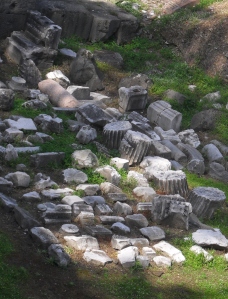 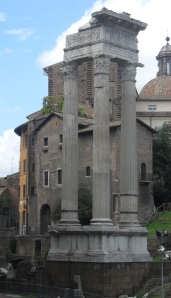 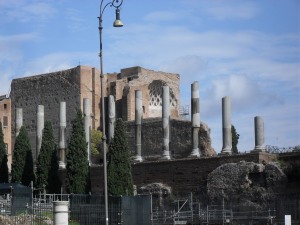 …………….and of course those “borrowed” from other ancient cultures and incorporated into Roman art…….. 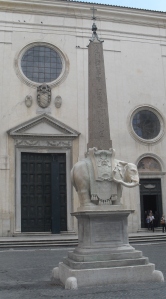 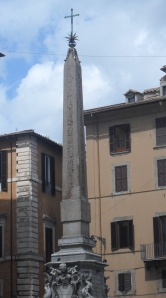 One of my all time favorite buildings is the Pantheon……… 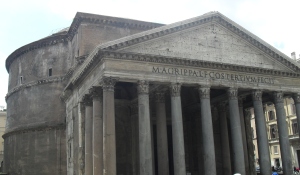 The Pantheon was commissioned by Marcus Agrippa as a temple to all the gods of Ancient Rome, and rebuilt by Emperor Hadrian in about 126 AD. The building is circular with a portico of large granite Corinthian columns (eight in the first rank and two groups of four behind) under a pediment. A rectangular Vestibule links the porch to the rotunda, which is under a coffered, concrete dome, with a central opening (oculus) to the sky. Almost two thousand years after it was built, the Pantheon’s dome is still the world’s largest unreinforced concrete dome. 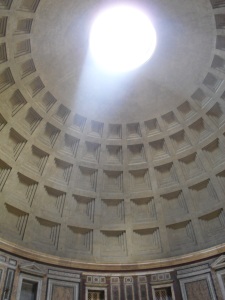 It is one of the best preserved of all Roman buildings. It has been in continuous use throughout its history, and since the 7th century, the Pantheon has been used as a Roman Catholic church dedicated to “St. Mary and the Martyrs” but informally known as “Santa Maria della Rotonda.” The square in front of the Pantheon is called Piazza della Rotonda. 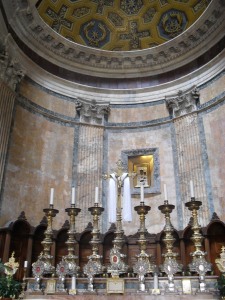 The ancient Roman writer Cassius Dio speculated that the name comes either from the statues of so many gods placed around this building or from the resemblance of the dome to the heavens.

…………and of course there is The Trevi Fountain……

Located in the Trevi district of Rome, the Trevi Fountain stands 85.3 feet high and 65.6 feet wide.  It is the largest Baroque fountain in the city and one of the most famous fountains in the world.  The fountain is at the junction of three roads (”tre vie”)   In 19 BC, supposedly with the help of a virgin, Roman technicians located a source of pure water, this scene is presented on the present fountain’s façade.  This ”Aqua Virgo” led the water into the Baths of Marcus Vipsanius Agrippa.  It served Rome for more than four hundred years.  The coup de grâce for the urban life of late classical Rome came when the Siege of Rome (537-538) broke the aqueducts. Medieval Romans were reduced to drawing water from polluted wells and the Tiber River, which was also used as a sewer.

The Roman custom of building a handsome fountain at the endpoint of an aqueduct that brought water to Rome was revived in the 15th century, with the Renaissance. In 1453, Pope Nicholas V finished mending the Acqua Vergine aqueduct and built a simple basin, designed by the humanist architect Leon Battista Alberti, to herald the water’s arrival.  In 1629 Pope Urban VIII, finding the earlier fountain insufficiently dramatic, asked Gian Lorenzo Bernini to sketch possible renovations, but when the Pope died, the project was abandoned. Though Bernini’s project was never constructed, there are many Bernini touches in the fountain as it exists today.  An early, striking and influential model by Pietro da Cortona, preserved in the Albertina, Vienna, also exists, as do various early 18th century sketches, most unsigned, as well as a project attributed to Nicola Michetti.
Competitions had become the rage during the Baroque era to design buildings, fountains, and even the Spanish Steps. In 1730 Pope Clement XII organized a contest in which Nicola Salvi initially lost to Alessandro Galilei – but due to the outcry in Rome over the fact that a Florentine won, Salvi was awarded the commission anyway.  Work began in 1732, and the fountain was completed in 1762, long after Clement’s death, when Pietro Bracci’s Oceanus (god of all water) was set in the central niche.  Salvi died in 1751, with his work half-finished, but before he went he made sure a stubborn barber’s unsightly sign would not spoil the ensemble, hiding it behind a sculpted vase, called by Romans the ”asso di coppe”, the Ace of Cups.

The Trevi Fountain was finished in 1762 by Giovanni Paolo Pannini, who substituted the present allegories for planned sculptures of Agrippa and “Trivia”, the Roman virgin.

It was a joyous celebration of this old matriarch, who has seen and contributed so much to our lives……even today the Trojans march in her honor

…..as we leave this beautiful city in her celebration, I thought you might enjoy some Roman quotes:

Roma caput mundi : Rome, Center of the World
Tutte le strade portano a Roma : All roads lead to Rome
Roma non fu costruita in un giorno : Rome wasn’t built in a day
Quando ce vo’ ce vo’ : When it’s needed, it’s needed – meaning there is no choice
Fammo alla romana : Let’s do as the Romans do
Quando sei a Roma : When in Rome
la citta eterna con le sue virtu e i suoi vizi : The Eternal City with its virtues and its vices