The foundation date of Caesaraugusta has not been set with total precision,

In 714 the Berbers and Arabs took control of the city, renaming it Saraqusta (سرقسطة).

It later became part of the Emirate of Cordoba

It grew to become the biggest Muslim controlled city of Northern Spain and as the main city of the Emirate’s Upper March, Zaragoza was a hotbed of political intrigue

In 777 Charlemagne was invited by Husayn, the Wali (governor) of Zaragoza, to take the submission of the city

But when Charlemagne marched an army to the city gates he found Husayn to have had a change of heart and was forced to give up after a month-long siege of the city, facing Basque attacks on his rear guard on his withdrawal.

From 1018 to 1118 Zaragoza was one of the taifa kingdoms, independent Muslim states which emerged in the eleventh century following the destruction of the Cordoban Caliphate.

Zaragoza is linked by legend to the beginnings of Christianity in Spain. According to legend, the Virgin Mary appeared miraculously to Saint James the Great in the first century, standing on a pillar. 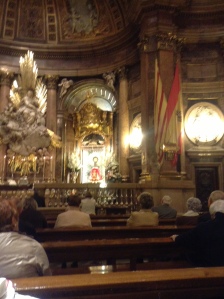 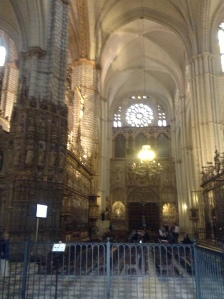 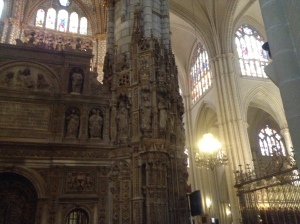 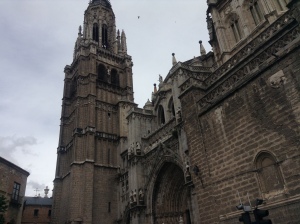 The city walls, churches, basilicas, palaces, stately houses and squares of the old quarter reflect the different civilizations that settled the city.

Romans, Moors, Jews and Christians left their cultural legacy behind, waiting to be admired to this day. There are certain monuments and places that are simply not to be missed.

You can start the day in Plaza del Pilar Square, alongside the Ebro River. Here you will find three of the city’s emblematic buildings: The Pilar Basilica, church and universal symbol of Zaragoza; La Lonja Palace, the region of Aragon‘s most important 16th century civil building, venue for many exhibitions throughout the year; San Salvador Cathedral (the “Seo”),  Aragon’s most valuable and significant monument, where you will find medieval artistic styles reflected, along with Renaissance and Baroque elements. Be sure to look at the exterior wall of the Parroquieta Chapel, on one side of the Seo – it is the pinnacle of Zaragoza Mudejar architecture. 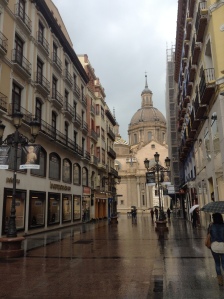 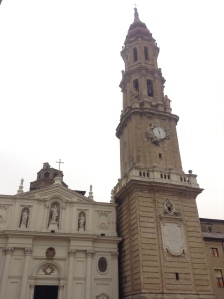 Then, head for the Caesaraugusta Theatre Museum, just a few minutes walk away. See what the Roman city’s most popular monument was like. 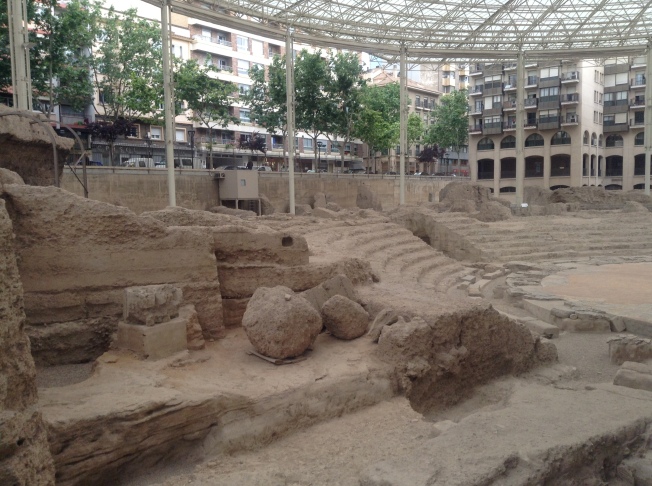 There are many witnesses to Zaragoza’s imperial past to be seen – the city walls, the Forum, the River Port and the Public Baths, with their respective museums. 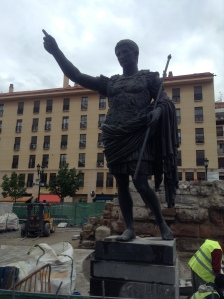 Wonderful, near the Roman Wall is a Public Market… 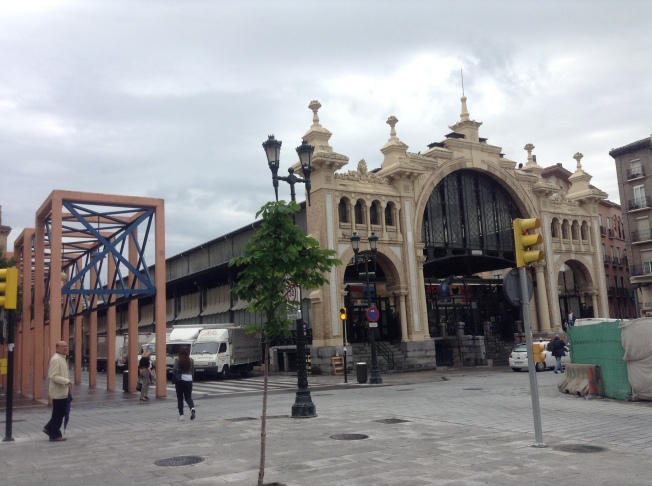 What a fantastic find……..the Market is brimming with goodies…… 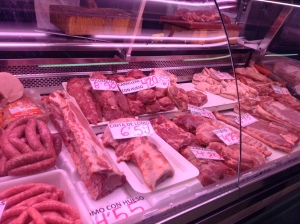 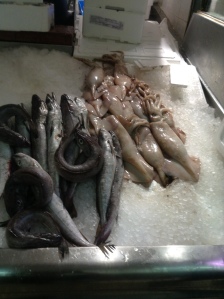 Then off to lunch at Los Cabezudos Restaurant for al fresco dining….to include Caracoles del Mar 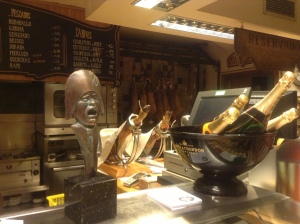 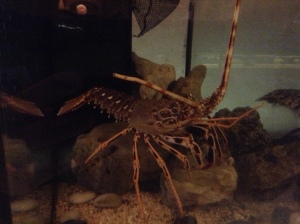 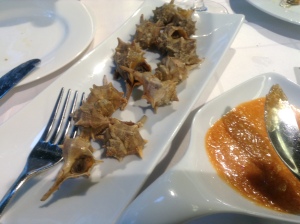 Puente de Piedra is also called the Bridge of Lions because four lions (symbols of the city) are placed on the pillars at both sides of the bridge.

After touring, the best way to end a stay in Zaragoza is to visit its Plaza del Pilar in the evening as the spires of the city’s two cathedrals make dramatic shadows across the pavement.

In this place where the Romans once walked and where countless pilgrims have journeyed, the warm spirit of Zaragoza shines most brightly.  As it has for many centuries, this city continues to invite visitors to enjoy its charms.

But now it is time for dinner…….a cool evening……beautiful fountains….

We found the perfect place to dine….Casa Teo 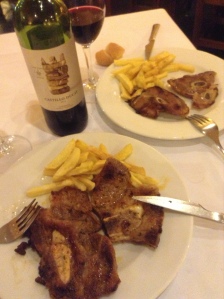 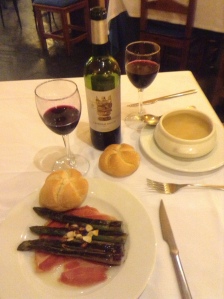 Marvelous to be traveling Europe during Asparagus Season…..

Then off to the hotel with incredible views of the city….

Zaragoza has an incredible Train Station, where we plan the next stop in our adventure……

We love to travel Europe by Train………the Global Eurorail Pass allows the freedom to explore where and when you want….

As we approached Zurich and this is what we saw out the window, we knew we were in for a real treat……..

The city was beautiful and pristine………..

Zurich  is the largest city in Switzerland and the capital of the canton of Zurich. It is located in north-central Switzerland at the northwestern tip of Lake Zurich.

turiThe municipality has approximately 390,000 inhabitants, and the Zurich metropolitan area 1.83 million.   Zurich is a hub for railways, roads, and air traffic.

Both Zurich Airport and railway station are the largest and busiest in the country.

The Train Station is clean, organized and beautiful….

Permanently settled for around 2000 years, the history of Zurich goes back to its founding by the Romans, who, in 15 BC, called it Turicum.

However, early settlements have been found dating back more than 6400 years ago.   During the Middle Ages Zurich gained the independent and privileged status of imperial immediacy and, in 1519, was the place of origin and center of the Protestant Reformation in German-speaking Switzerland, led by Ulrich Zwingli.

Zurich is a leading global city and among the world’s largest financial centers.

The city is home to a large number of financial institutions and banking giants. Also, most of the research and development centers are concentrated in Zurich and the low rate of tax attracts overseas companies to set up their headquarters there.

Monocle’s 2012 “Quality of Life Survey” ranked Zurich first on a list of the top 25 cities in the world.   According to several surveys from 2006 to 2008, Zurich was named the city with the best quality of life in the world as well as the wealthiest city in Europe.

We could believe that as we had our coffee on the Limmat River, which flows through downtown… 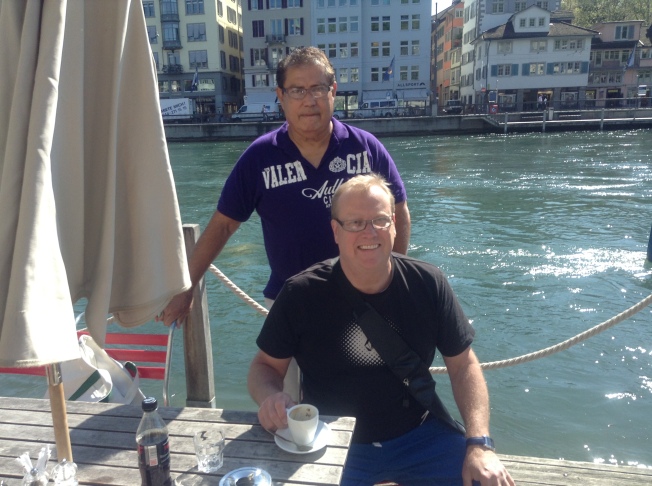 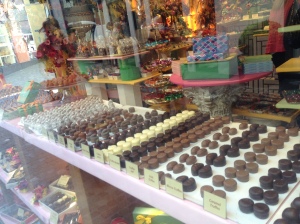 The people were all so happy and friendly, the city filled with nooks and crannies …… 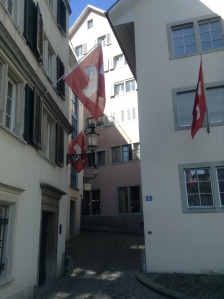 We loved wandering this beautiful city and enjoying all the fountains.. 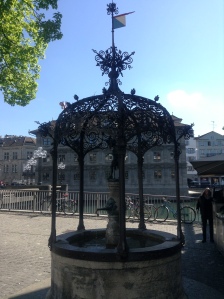 We had lunch at  Restaurant Schipfe on the banks of the Limmat River, can you imagine a river running through a major city in the United States …………this clean! 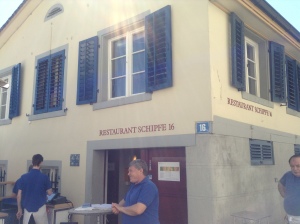 After lunch we continued to explore Marvelous Zurich….. 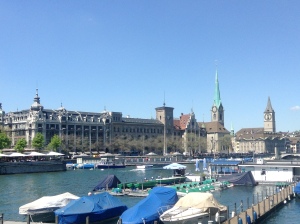 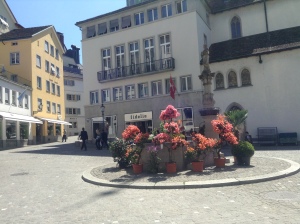 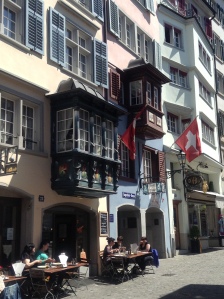 We visited the Fraumünster Church built on the remains of a former abbey for aristocratic women which was founded in 853 by Louis the German for his daughter Hildegard.

He endowed the Benedictine convent with the lands of Zurich, Uri, and the Albis forest, and granted the convent immunity, placing it under his direct authority.
Today, it belongs to the Swiss Reformed Church.

The Windows were designed by Marc Chagall and installed in 1970….. 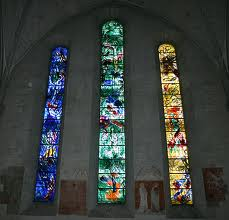 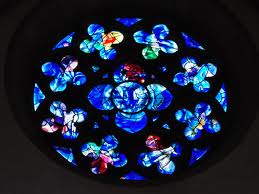 I loved the  décor in our hotel, the Ibis Zurich West ………the bar and the restaurant…..

….but with all wonderful trips…………it is time to MOOve on…… 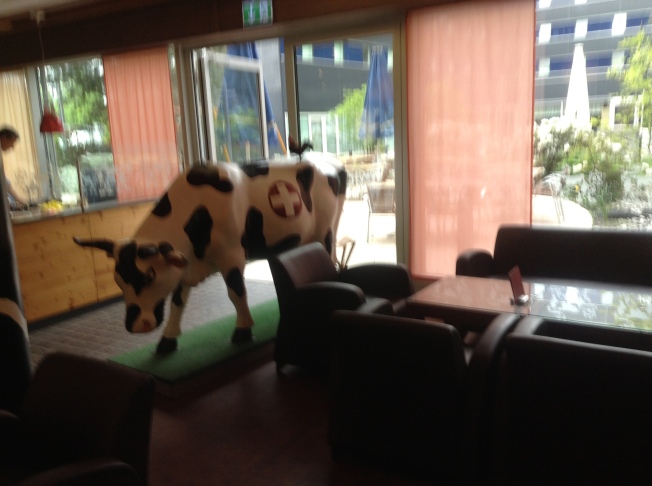