Formerly known as Decoration Day.  It typically marks the start of the summer vacation season, while Labor Day marks its end.

Many people visit cemeteries and memorials, particularly to honor those who have died in military service. Many volunteers place an American flag on each grave in United States national cemetery.

A fact that you should probably know is that African Americans are the reason that Memorial Day even exists in the first place. 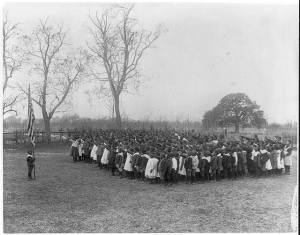 According to Professor David Blight of Yale University, the event began on May 1, 1865.  A group of former slaves in Charleston, SC gave a proper burial to 257 Union soldiers who’d been put into a mass grave. 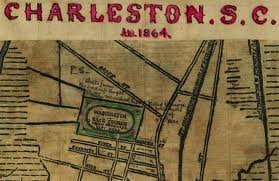 The black community of Charleston then consecrated the new cemetery with “an unforgettable parade of 10,000 people.”

The event was initially called “Decoration Day” and was led by 3,000 black school children who started off by singing the song “John Brown’s Body.”  They were then followed by hundreds of black women with baskets of flowers and crosses.  After that, black men marched behind them in cadence, followed by Union infantry.

The Union soldiers lived in horrible conditions, and 257 of them died from exposure and disease.

This was the reason for the creation of the mass grave site.  A total of 28 black men went to the site and re-buried the men properly, largely as a thank you for helping fight for their freedom.

They also built a fence around the cemetery, and on the outside, put the words, “Martyrs of the Race Course.” 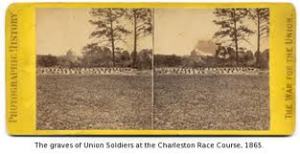 Dr. Boyce Watkins, who created an online course based on a forum held with Minister Louis Farrakhan, says that this is simply the tip of the iceberg.

He says that misinformation is one of the most storied weapons used to perpetuate the oppression of black people.

“Black people must, as part of our healing, go back and rewrite history to ensure that we learn the truth,” said Dr. Watkins. “You’ve been lied to for your entire life, so it is up to all of us to use the Internet as a critical resource in helping us to learn who we truly are.  We are great people and America would not be the country that it is today without our sacrifice.”

Now you know the rest of the story.  Go tell this one to everyone you know……

We arrive at the Amsterdam train station and find our hotel is within walking distance. The station is called Central Station and rightly so, from here you can step onto a train, bus, trolley, water cab or land cab. We are set to take a tour of the city on a water trolley tomorrow. What fun!!! Today we stroll through the streets and enjoy visiting many shops and also take a moment to dine at a sidewalk cafe having mushroom soup and the wonderful hot dogs on a lovely bread with Gruyère cheese and mushrooms along with Heineken Beer.

I take August to the red light district and we stroll through as the women try to tempt us from behind the glass — if they only knew! My only disappointment is that there were no men! Who ever heard of such a thing!

Today is Memorial Day in Holland. We are well rested and eager to be off on our exploration of this city that offers such adventures. We buy tickets on the boat to tour the canals and for entrance into the Van Gogh Museum! The museum was most wonderful and filled with the works of many Impressionists! It was so incredible to be within inches of the works that I have studied all my life. The works of Van Gogh were accompanied by Monet, Manet, Pissarro and so many others that I have forgotten. I so wish I could have viewed these when I was young and attempting to paint. No reproduction or text-book ever came close to these originals. The way light and shadow were brought to life by these incredible artists was breath-taking.

Our tour of the canals was most interesting; the canals lined with houseboats that are actual residences. 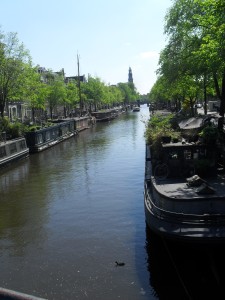 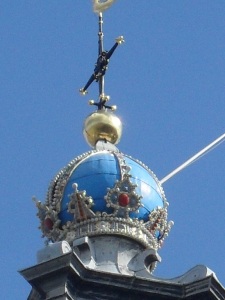 As we walked the city after our tour we learned that the Queen, Beatriz, herself, would be visiting Amsterdam in a few hours to place a wreath on the tomb of the unknown soldier; we immediately made plans to participate. It is not everyday that one is able to be within a few feet of a royal family. The ceremony was quite beautiful and the entire city shuts down and observes two minutes of silence. It was almost unnerving to have this loud and boisterous city fall under a complete hush. We dedicated our silence to our friend, Gordon Smith. The youth gave us commemorative torches to wear. Here is Queen Beatrix and the Royal Family! 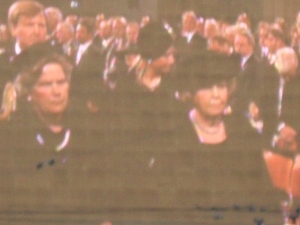 All in all this has been a most amazing day in a most amazing city. We are now settled in our room for some much-needed rest. Oh! I almost forgot, we also went to the city flea market and purchased so many beautiful antiques! I purchased some old coins for Jose. We found marvelous shirts from the teams of Germany, Argentina and Spain and some great Capri pants from Italy. Oh what fun we are having. My dreams shall be filled with memories of all the fantastic images of the day. Our last day in Amsterdam. We are a bit fatigued from our event filled day yesterday. We take our time in the morning and venture out for a nice breakfast in the street cafe of omelets, toast and cafe latte. Very relaxed and the sun is very nice to sit in as the days still tend to be quite chilly. We enjoy a trip to the grocery store and marvel at all the delightful dishes available. Off we go to the post office to mail our post cards and were given a wonderful commemorative bag by the post master…….what lovely people!

In our journey we find a delightful restaurant offering traditional Dutch food and decide this will be our dining spot this evening. We go back to the room and August takes a nap while I explore options for the rest of our travels. We decide upon the following: Berlin, Prague, Vienna, Salzburg and Munich. We make hotel reservations for Prague and will investigate the others during our dinner.

We have walked to our restaurant Fogata and sit outside in the warm Holland sun. Our first course is mussels cooked in tomatoes and mushroom OMG — how delightful!…….along with fried calamari and a bottle of white wine!!!

We end the meal with a traditional Dutch stew. The stew is beef, seasoned with onion, bay leaf and a hint of allspice, separate bowls contained boiled potatoes, as soft and flavorful as one would want, sprinkled with fresh parsley and nutmeg and a second bowl of cooked red cabbage, wonderfully rich and creamy. We finish our meal and sip on our wine as we watch the people go by. We hear all the languages of the world spoken as they engage in their conversations. Our journey is halfway over and we reflect upon all the adventures we have experienced thus far and ponder on those to come.