The Flying Monkeys were restless and wanted to explore some new place, so off we went to Shiner, Texas

Shiner is located in Lavaca County.

It all began in 1887 when Henry B. Shiner donated 250 acres of land for a railroad right of way.

To our amazement there are no hotels in Shiner!  So we booked a room at the Shiner Country Inn..

Not the lap of luxury, but clean

Shiner is the home of the Spoetzl Brewery,  the oldest independent brewery in Texas.  The brewery is most well known for producing Shiner Bock,  a dark German/Czech-style beer that is now distributed in 41 states.

We explored the entire town to plan our itinerary………okay that took 10 minutes,

so we went to Snowflake Donuts for breakfast…

Upon entering we found a table of about 20 locals, all of whom ceased conversation and stared at us the entire time we were in the place…….okay weird! 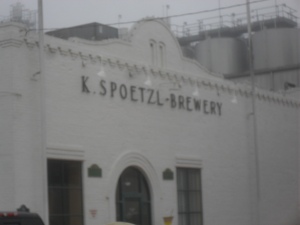 and placed Herman Weiss in as the company’s first brewmaster.

Spoetzl had attended brewmaster’s school and apprenticed for three years in Germany, worked for eight years at the Pyramids Brewery in Cairo, Egypt, and then worked in Canada.   He moved to San Antonio in search of a better climate for his health, bringing with him a family recipe for a Bavarian beer made from malted barley and hops.

During Prohibition in the United States,  Kosmos Spoetzl kept the brewery afloat by selling ice and making Low-alcohol beer  “near beer.”   After Prohibition only five of the original 13 Texas breweries were still intact.   When the Prohibition laws were repealed, larger beer plants, such as Anheuser-Busch, moved to Texas making life harder on the smaller independent breweries,  but Spoetzl kept things small and simple,  never going more than 70 miles for business.

The owner’s daugher, Miss Cecelie took over operations in 1922

and became the only woman in the United States to be a sole owner of a brewery in 1950.

As of 2012,  it was the fourth-largest craft brewery and tenth-largest overall brewery in the United States.  Spoetzl currently produces eight beers year round and four seasonal brews per year.

We were so lucky to have the Brewmaster, Jimmy Mauric, conduct a personal tour! 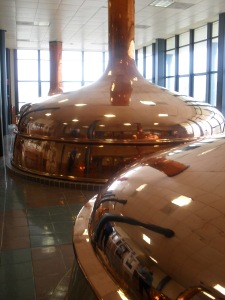 The view of the bottling room was amazing……..many thousands of bottles whirling around….. 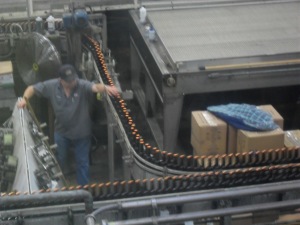 The tour over it was time for a late lunch……….where should we go…..oh yes the only restaurant in town….

The Shiner Restaurant and Bar..

The place was empty!  The bar was quite beautiful and ornate 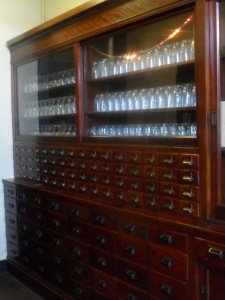 The food was great….we began with the Shiner Beer Bread and Shiner Black Butter

…..then on to the Pulled Pork Sandwich and the “World’s Best Sandwich”……that was really the name!

It was a Club Style BLT with a Chicken Fried Steak thrown in for Good Measure…….don’t tell my Cardiologist about this post!