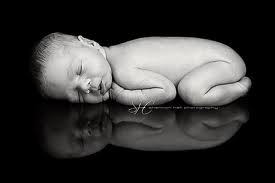 When our lives begin, what dreams do we have, what vision for our future………..what shall we become?
I often ponder our existence and the it’s meaning.

In the realm of the universe….even of our mere planet; we a so very insignificant, and yet we place such great importance on our every word and action……….what are we really?

When I was very young I read Plato‘s “Allegory of the Cave” from The Republic, Book VII,  and have often wondered if we are only viewing the shadows of reality.

The Wise and Noble Plato

You see, in the allegory of the cave, prisoners are tied up and only allowed to face forward where they see shadows on the wall……..shadows played out by actors behind them.

Are we those prisoners, watching a two-dimensional scenario being played out before us, or are we the prisoner who escaped and saw reality. I suppose this question rises to the surface in a more intense manner each year there is a presidential election in the U.S. The grandstanding, the lies, the shadows on the wall become so very intensified that I begin to question my own reality.  Having been raised in an isolated German community, where we still spoke German and our values and culture were German and not “American.”

I often wonder if I moved from the sunlight to the cave when the isolation of my community disappeared and we integrated into this society.
What is shadow and what is sunlight? 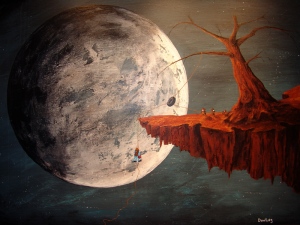 I had the great priviledge of meeting someone who undid my shackles and drug me out of the cave in 1980.

She was my undergraduate English teacher and so powerful was her gift of enlightenment….

…..  we have remained close friends ever since.

Recently I had the great privilege and joy of traveling to Pennsylvania to spend time with her.

She now lives in Media, Pennsylvania, in a most marvelous and charming neighborhood with her wonderful husband Jim and two enchanted dogs: Lily and Sir Winston. How grand it was to reenergize with people who are so vital and have become such close family.

You see Plato was arguing that anyone who holds a truth has an obligation to share that truth, and that is what my most wonderful Mary did.

Dining at the Table of Wisdom

Mary and Jim
Happy in Media

Is it possible that many may embrace reality but few accept the perception of that same reality? 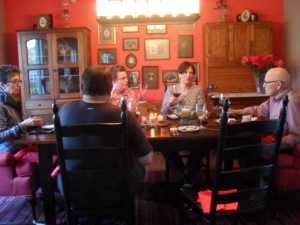 We can only say that our lives have had the shackles thrown off, even if for a bit, and we were able to see the sunlight…..

…. so when that last shadow is cast we might hold those moments in appreciation….. 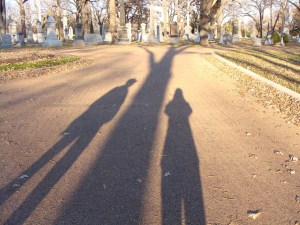 …………and those ruby slippers, once so important… are no longer needed