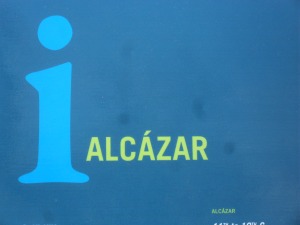 ….and so it begins, our journey to The Alcazar of Segovia

She sits upon the hilltop guarding over the town, her steady gaze upon us.

Rising out on a rocky crag above the confluence of the rivers Eresma and Clamores near the Guadarrama mountains, it is one of the most distinctive castle-palaces in Spain by virtue of its shape – like the bow of a ship.

The Alcázar was originally built as a fortress but has served as a royal palace, a state prison, a Royal Artillery College and a military academy since then.

The castle is one of the inspirations for Walt Disney’s Cinderella Castle.

The Alcázar of Segovia, like many fortifications in Spain , started off as an Arab fort, which itself was built on a Roman fort but little of that structure remains.

The first reference to this particular Alcázar was in 1120, around 32 years after the city of Segovia returned to Christian hands in the days of  Alfonso VI of León and Castile

Throughout the Middle Ages The Alcazar remained one of the favorite residences of the monarchs of the Kingdom of Castile and a key fortress in the defense of the kingdom.

It was during this period a majority of the current building was constructed and the palace was extended on a large scale by the monarchs of the Trastámara dynasty.

Below is a picture of The Throne Room….. 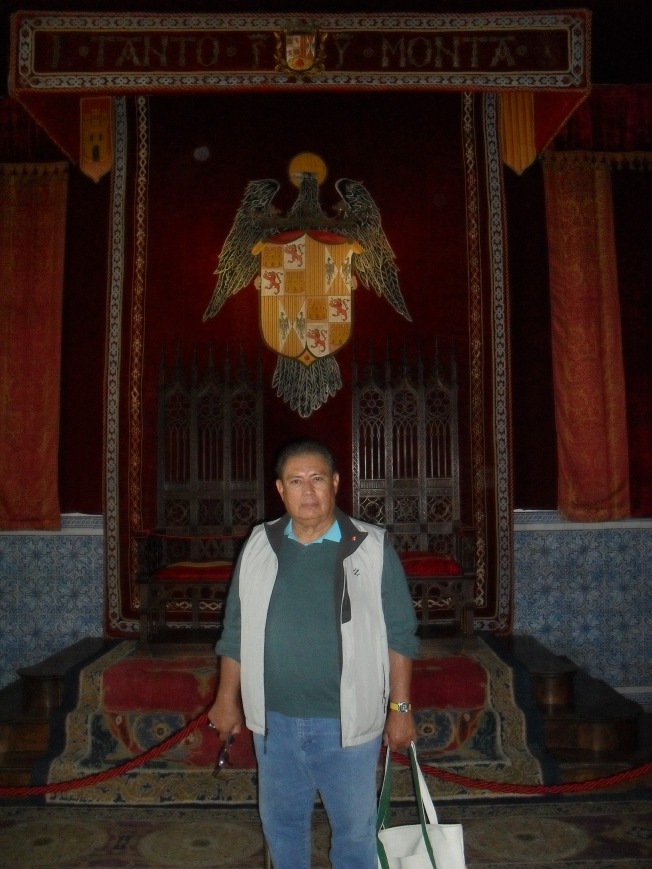 In 1258, parts of the Alcázar had to be rebuilt by King Alfonso X of Castile after a cave-in and soon after the Hall of Kings was built to house Parliament. 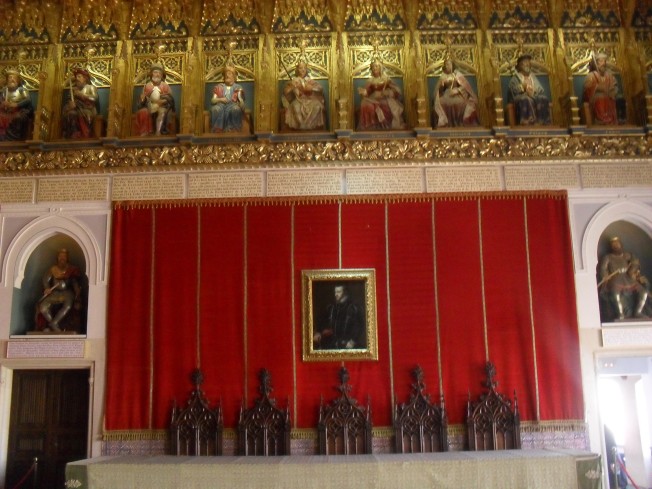 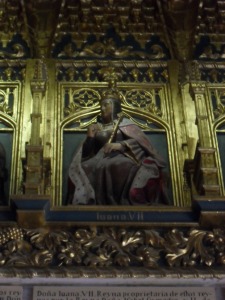 However, the single largest contributor to the continuing construction of the Alcázar is King John II who built the ‘New Tower’ (John II tower as it is known today).

In 1474, the Alcázar played a major role in the rise of Queen Isabella I of Castile.

On 12 December news of the King Henry IV‘s death in Madrid reached Segovia and Isabella immediately took refuge within the walls of this Alcázar where she received the support of Andres Cabrera and Segovia’s council.

She was crowned the next day as Queen of Castile and León.

The interior of the Castle of Segovia is in perfect accordance with the magnificence of its exterior. Many apartments are decorated with delicate traceries and pendant ornaments, in the style of the Alhambra 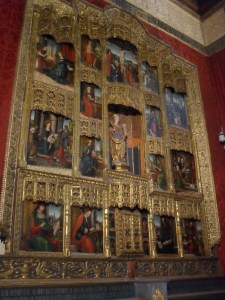 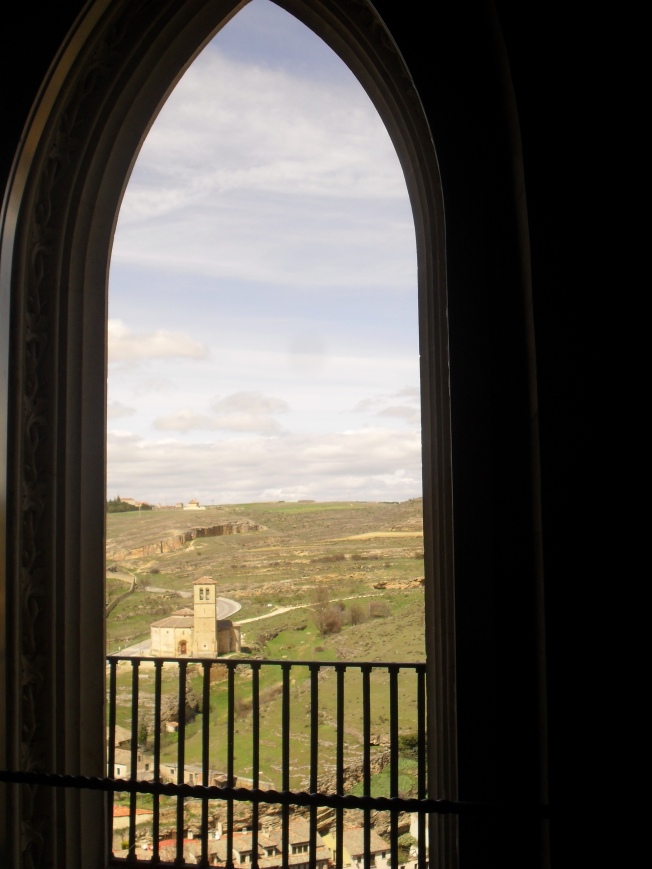 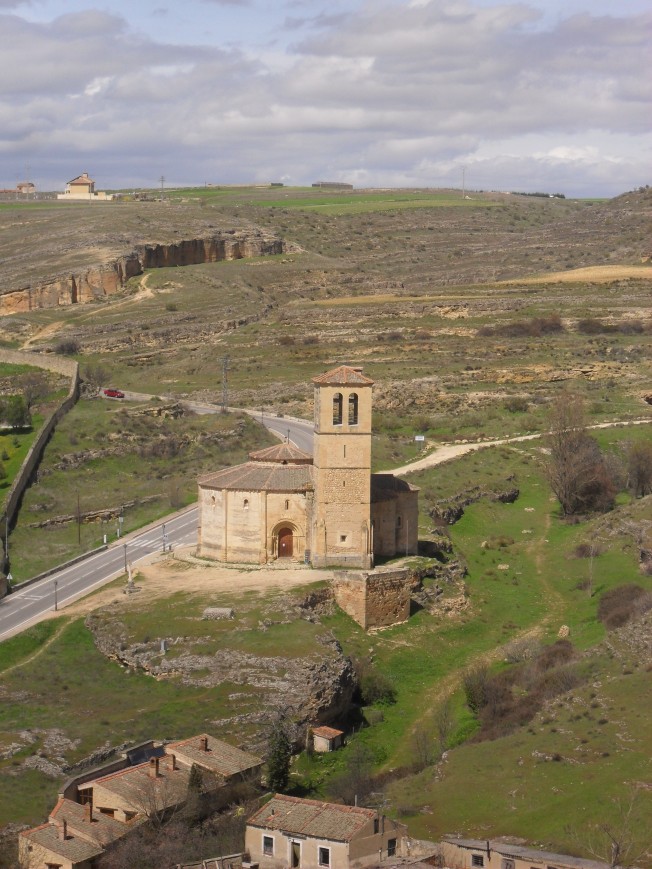 Inside, the round nave centers on an unusual two-story gallery, where the Knights are thought to have kept vigil over the sliver of wood, as it rested on the altar below….

The Church is patterned on the Church of the Holy Sepulchre in Jerusalem, where according to legend the True Cross was found by St. Helena in the 4th century.

Such enchantment and history surrounded by snow capped peaks…… 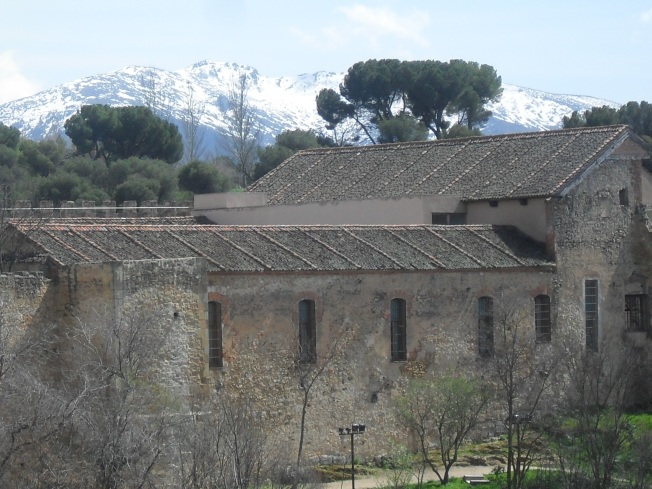 Wandering about The Alcazar, one is swept into the history that took place within her walls….

A world of enchantment…..with the most amazing views…

Segovia is a Spanish city of about 55,000 people in the Castile-Leon province of Spain, about an hour north of Madrid.

Designated a UNESCO World Heritage Site, the old city of Segovia is spectacularly situated atop a long, narrow promontory.

It contains a wealth of monuments, including a cathedral, a magnificent ancient Roman aqueduct, and the beautiful fairy-tale spires of the Alcázar, or castle-palace, that towers over the countryside below.

Scattered about the city are a half a dozen Romanesque churches of great interest, and a church that was once a synagogue.

The Roman aqueduct of Segovia, probably built c. A.D. 50, is remarkably well preserved. This impressive construction, with its two tiers of arches, forms part of the setting of the magnificent historic city of Segovia.

The Aqueduct of Segovia is  one of the most significant and best-preserved ancient monuments left on the Iberian Peninsula. It is  the foremost symbol of Segovia, as evidenced by its presence on the city’s coat of arms.

At the end of the 20th century, a German archaeologist managed to decipher the text on the dedication plaque of the aqueduct by studying the anchors that held the now missing bronze letters in place. Using this method, he was able to determine that in actuality it was the Roman Emperor Domitian who ordered its construction.

The aqueduct transports waters from Fuente Fría River, situated in the nearby mountains,  from the city in a region known as La Acebeda.

The first reconstruction of the aqueduct took place during the reign of the King Ferdinand II of Aragon and Queen Isabella I of Castile.   A total of 36 arches were rebuilt, with great care taken not to change any of the original work or style.

The aqueduct is the city’s most important architectural landmark. It had been kept functioning throughout the centuries and is preserved in excellent condition.   It even provided water to Segovia until recently!   Because of  decay of stone blocks, water leakage from the upper viaduct, and pollution that caused the granite  masonry to deteriorate and crack, the site was listed in the 2006 World Monuments Watch by the World Monuments Fund.   Contrary to popular belief, vibrations caused by traffic that used to pass under the arches did not affect the aqueduct due to its great mass. 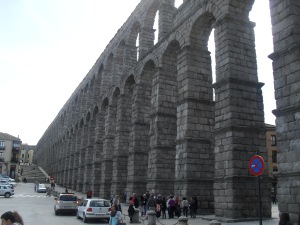 Spain brought together the Ministry of Culture, the regional government of Castilla y León, and other local institutions to collaborate in implementing the project, and provided assistance through the global financial services company American Express.  The Aqueduct is now listed as a UNESCO World Heritage Site.

We walked the entire length of the Aqueduct, while gazing up in wonderment.  You can actually walk along the top………of course chicken Tin Man said no to that idea!

It was quite amazing to see this impressive architectural achievement.  The excitement and physical activity worked up an appetite, so off in search of culinary delights, we went.

and what a delight it was….

The Bean Soup was our very favorite….it is a traditional dish from the area…. 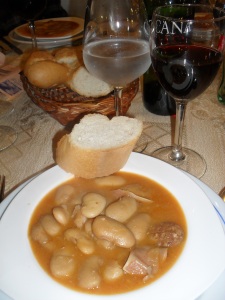 ….followed by the Roast Suckling Pig…

…and a marvelous assortment of sweets…

…we have been traveling about Europe for the past six weeks and I plan to share many more stories with you soon….