If you have been reading the exploits of the Tin Man, you know that he often travels to Media, Pennsylvania to visit the Marvelous, Magical Mary.

…………so in usual Tin Man fashion, here is a bit of history of the place called Media….

The borough of Media was incorporated in 1850 and  is the county seat of Delaware County, Pennsylvania.

In June 2006, it became the first fair trade town in America. 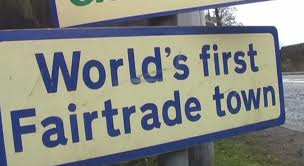 The history of the town goes back to William Penn, who was named proprietor of the colony of Pennsylvania in 1681 by King Charles II of England.

The Delaware County Institute of Science was founded in Media in 1833.

Media promotes itself as “Everybody’s Hometown”.

Peter and William Taylor bought the land where Media is now located, directly from Penn.

Thomas Minshall, a Quaker, was an early Media resident, settling just outside the small village then known as Providence, along the Providence Great Road.  The village then included a tailor shop, blacksmith shop, wheelwright shop, barn and other buildings.  Minshall bought 625 acres from William Penn and arrived in 1682. The Providence Friends Meeting was established at his house in February, 1688, and a meetinghouse was later built on land he donated for the purpose.  The original meetinghouse was built out of logs in 1699 or 1700 and the current building dates to 1814.

Minshall’s house still stands and was given to the citizens of the borough in 1975.

The John J. Tyler Arboretum occupies part of Thomas Minshall’s original  property.   This farm was used by the underground railroad.   The land was donated to a public trust in 1944 by an eighth generation descendant. The arboretum was started as a private collection by brothers Jacob and Minshall Painter.  In 1825 they began systematically planting over 1,000 varieties of trees and shrubs.  Over 20 of their original trees survive including a giant sequoia. 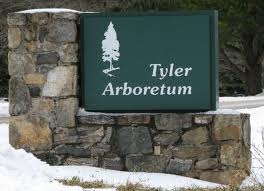 Media may be best known for secret government documents which were illegally seized there by activists in 1971 and distributed nationwide.  On March 8 of that year, the Citizens’ Commission to Investigate the FBI raided a FBI “resident agency” in Media. They later released thousands of documents to major newspapers around the country. These documents revealed controversial and illegal FBI tactics, like the recruitment of Boy Scouts as informants, and confirmed for the first time the existence of COINTELPRO, a FBI program to “expose, disrupt, misdirect, discredit, or otherwise neutralize” dissident groups in the US.

Now back to the Tea Room…..

Downtown Media is a plethora of restaurants, shops and art….

We love to walk the streets and run across them to avoid the Trolley Cars, exploring all the marvelous culinary delights. 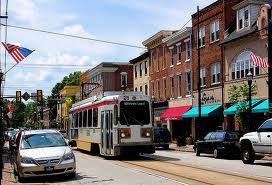 On a recent trip, we went to explore the delights of an English Tea Room… Tea & Cakes

what a delightful and interesting place. ……. one of the owners sits in the Tea Room and joins any and all conversations she desires…and she is quite opinionated!

We had some delightful fare……

A plate of High Tea Sandwiches and Sweets… 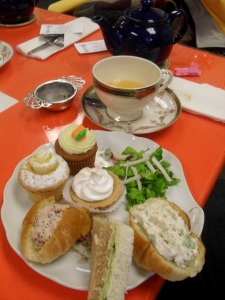 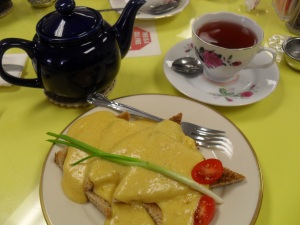